We couldn’t have been more thrilled by a review than we were by Kristen Sollee’s listicle of bad-ass feminist comics in Bustle. From her intro:

Like many kids, I devoured my fair share of comics growing up, but they were mostly of the dude-centric variety. When I finally discovered feminist comics in my teens, it was thrilling to see characters and storylines that more closely reflected the world I inhabited. These days, I’m particularly a fan girl of feminist comics that wield humor and irony like weapons — two things indispensable to dealing with life as a lady-identified person in the 21st century.

Give you feels? Us too. That’s part of why we made Threadbare, which Sollee calls “a gut-wrenching yet vital zine about exploitation, consumption and production … a serious slab of truth that should be required reading for every fashion-loving feminist.” Read the rest here!

When you look closely at widely publicized sex trafficking campaigns, you see less facts and more anti-sex, xenophobic mythologies. … What does stand out is a corporate agenda, a Christian Imperialist agenda, and an anti-sex work agenda. There is a capitalistic puritanical reign that perpetuates biased, moralistic notions of sex while reinforcing the “merits” of cheap, exploitative foreign labor. There is also the erasure of trans women and men in the sex industry. The anti-trafficking narrative criminalizes and endangers consensual sex workers and through lack of any other options pushes more women (cis and trans) in places like Cambodia, India and Haiti into the harsh, dangerous and often times worse-than prostitution conditions of the garment industry. Women worldwide are kept in poverty, and the same myth remains: sex work is sex trafficking, and a woman is better off in the sweat shop than the brothel. In Anne Elizabeth Moore‘s latest comics journalism expose Threadbare, we see these myths unravelling.

Women Write About Comics weighed in with a great conversation-as-review here, ending on this stellar note:

Readers who are searching for something they can do to combat the exploitative nature of the garment industry can help by expanding Threadbare’s reach. Tell your schools and libraries to purchase it, order it from your local comic shops and bookstores, and buy copies for your friends! Awareness is important; awareness can increase the number of people who try to vote for policy-makers who have these issues on their radar. Ultimately, there isn’t much we can do on an individual level, but we can spread the word.

Finally, there’s this delightful look, by Kevin Bramer at Optical Sloth. Worth reading in full, but here’s the kicker:

Even if you think you’re an expert on this subject I guarantee that you’ll find new information in here, and the comics are drawn by the some of the best artists working today. If you know any millionaires please tell them to throw some money at people who are looking to do this type of graphic journalism, because the world needs more of it.

We’ve been so busy winning houses for comics and prepping for CAKE and the AMC that we’ve barely had time to attend our own book-launch events, much less post pics from them! Still they were quite fun, and we wanted to share the love.

The pre-release panel talk at the Evanston Literary Festival, with Özge Samanci and Keiler Roberts, moderated by Brian Cremins.

The cashier’s station at Women and Children First for the booklaunch. Rivven brought all the collaborative zines we’ve made together over the last year!

AEM presents an overview of the book, the garment industry, and the particularly negative impact anti-trafficking organizations have had on Chicago sex workers.

We were thrilled to be joined at the Women & Children First event by SWOP-Chicago’s Serpent Libertine, who is also interviewed (extensively) in the book. We even held a raffle and raised over zero dollars for SWOP-Chicago’s educational and legal support efforts! (We forgot to count it, but we greatly appreciated your donations!)

Delia Jean gives an excellent intro to making comics journalism, as well as the unique difficulties facing those of us who want to depict the experiences of sex workers accurately, despite very few other media representations to turn to for inspiration or guidance.

Carolina Miranda at the LA Times wrote up a fantastic piece on our new book:

The collected reports look at the history of the trade, the lives of those employed in it (from sweatshop workers to retail staff to models) to the high human cost of fast fashion — which has put pressure on manufacturers to churn out ever cheaper clothes at ever faster rates.

“People faint on the factory floor,” Moore says. “They physically cannot keep up with the workload.”

Thanks for taking the time to credit each of the stellar artists, Carolina! Not to mention really thinking about what makes comics journalism so effective.

“Threadbare” is not light reading. But the comics format makes an opaque topic artfully illuminating. We may never visit the inside of a sweatshop. But the drawings take us right inside, amid the dusty piles of fabric and the whir of sewing machines.

“If you care about the general welfare of women, and all people around the world, this book is for you.” There are quite a few gems in this very, very early review of Threadbare from Portland Book Review, and we couldn’t be more excited to read it!

PBR says the work of comics journalism “reads almost like a graphic novel with a loosely connected plot, except it’s non-fiction. … Otherwise, the drawings and the cited research compel the reader to finish this quick read and feel uneasy in his or her very clothes.” The reviewer even concludes (correctly, according to our research) that, “Despite the belief of some people, anti-trafficking efforts make life harder for sex workers.”

The FEMSKT crew and Anne Elizabeth Moore (representing The Ladydrawers) gave a talk at Naisasialiitto Unioni after research residency at Villa Salin called, “Women don’t read comics and other false beliefs.” It was written up, comics-style, by the delightful Hanna-Piritan, more from whom can be seen here.

Read the full version (in Finnish) here. There’s a peeing man in it, so. 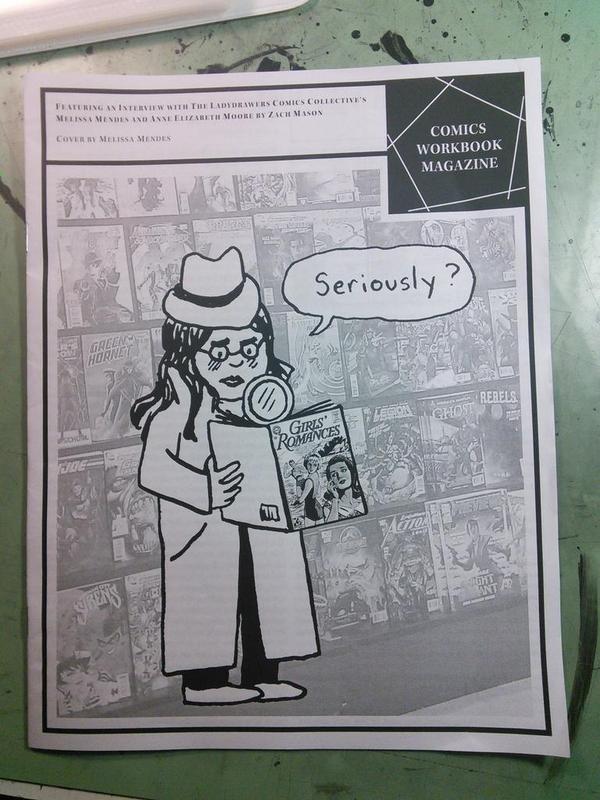 Violet, the super-sleuthin’ pet detective from our Bitch Media series Don’t Be a Dick, graces the cover of the current Comics Workbook Magazine. (Check the crews’ Tumblr here.) She’s only one of many amazing inventions from the mind of Melissa Mendes, who’s interviewed alongside Anne Elizabeth Moore by Zach Mason.

Here’s a clip, on HATERZ:

AEM: As far as pushback, we’ve had, and have, a ton of haters. … What I think people don’t realize, or they would stop expressing any venom toward us at all, is that all that stuff is fuel. The dude who left the comment about stats being the last refuge of people who have nothing to say? Used that in a strip. GT66, who used to troll us with long and nonsensical arguments about … well, it was sort of unclear. Women, or something? That guy was *the best.* I miss him a little bit, because when you hit that wall of hate, the stakes get really clear. You absolutely for sure know that you are on the right path, and then, best part: the angriest people start telling you where not to tread next. Then you go there.

All that stuff has died down some now, and we’re getting to some kind of critical mass, at least about gender and comics (or maybe more accurately, women and comics). There’s clearly a ton more to do: I haven’t seen anything yet that makes me believe the current conversation, which we obviously helped start, will result in permanent change. In the early days—just a few years ago!—it was sort of amazing. All the other folks in the crew had, like, no qualms about any of it. Nicole Boyett, Rachel Swanson—they would stay up all night reading hateful comments about us to each other and laughing. We even did a puppet show of them. Esther Pearl Watson designed most of the puppets from stuff she found on the ground in a field.

MM: I personally I haven’t had any haters (that I know of) on this front—just people being generally confused about when other characters are boys or girls, and one kid being genuinely mind blown by the fact that one of my characters, usually depicted in black and white, had “brown skin”.  Usually it’s kids that are the most honest.  They’re like “Is that a girl or a boy?” And just the fact that they are genuinely, and not hatefully, asking that question about a book they enjoyed makes me feel good. 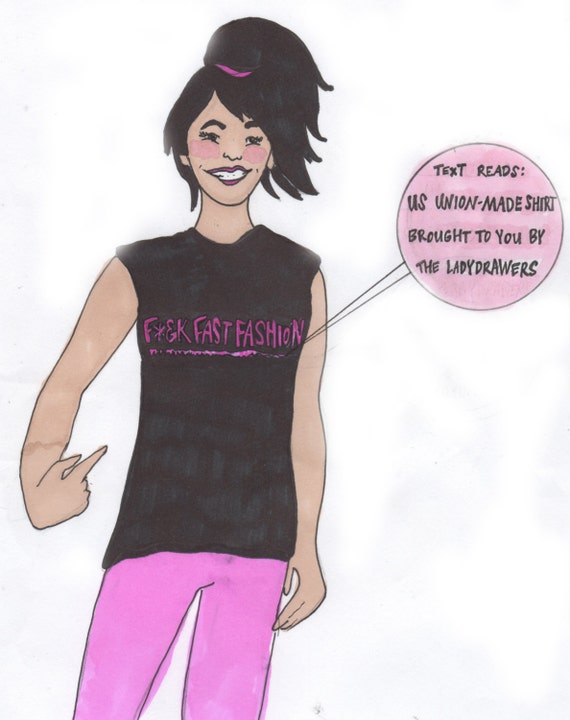